Surgery. That word, in and of itself, can cause fear and anxiety. It implies some combination of a hospital stay, anesthesia, stitches, scars, and recovery. In most cases, including idiopathic scoliosis, surgery is a treatment option of last resort and is to be avoided if possible. Unfortunately, though, some curves simply do not respond to more conservative treatments and surgery becomes the best option.

Such was the case for young scoliosis patient Camilla. Doctors diagnosed Camilla with idiopathic scoliosis at the age

of eight. Camilla’s parents sought out the very best treatment options for their young daughter and ended up at National Scoliosis Center (NSC) under the care of Certified Orthotist and scoliosis thought leader Luke Stikeleather. Luke created a custom Rigo Cheneau scoliosis brace for Camilla, which she wore for several years. She also engaged in Schroth Physical Therapy at NSC with Certified Schroth Therapist Downey Hinrichs.

Camilla received excellent care and diligently wore her back brace; she wanted it to work. She loved working with Luke and Downey and was under their care for about five years. However, she fell into the 3% of Luke’s patients that start with a large magnitude curve and require surgery after bracing. With her curves at 49-50 degrees, her doctors feared it would increase over time and surgery seemed her best option.

Camilla’s parents had two choices: (1) traditional spinal fusion surgery or (2) the relatively new vertebral body tethering (VBT) surgery. While traditional spinal fusion offered a more tried and true approach to correcting Camilla’s curve, it also entailed a more invasive surgery that would require a large incision down the length of the back, leave a large scar, and limit movement and flexibility in the years to come. The newer VBT surgery provided a less invasive approach (usually five small and inconspicuous incisions near the bra line), a shorter recovery time, and the ability to maintain spinal movement and flexibility over time. (Today’s Medical Developments) 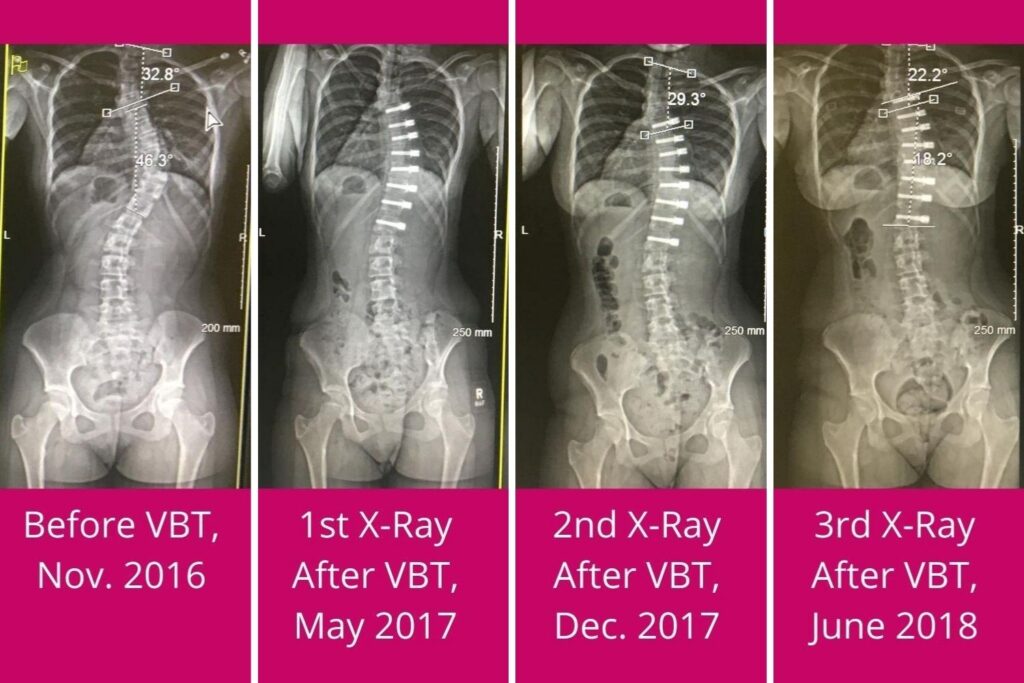 So, what exactly is vertebral body tethering or VBT? VBT involves surgically affixing titanium alloy anchors and bone screws, similar to those used for other spinal surgeries, into the scoliosis patient’s spine on the convex side of the scoliosis curve. The surgeon then attaches “The Tether” (a cord constructed of strong, flexible polymer) to the bone screws. Tension is set to provide partial straightening of the scoliosis curve. As the patient continues to grow, so does the tension on “The Tether”, promoting further straightening of the spine. Timing is key as the success of the procedure depends upon the patient’s future growth to increase tension over time. VBT surgery has been performed in the United States for the last decade, and the trademarked device (The Tether) and procedure received FDA approval in August 2019. (St. Louis Children’s Hospital) (FDA)

In Camilla’s case, the decision was made to pursue spinal surgery at a pivotal time: she was 13 years old and had a short, six-month window to undergo VBT surgery. After consulting with various professionals, including those at National Scoliosis Center and Dr. Amer Samdani (VBT expert and chief of surgery at Shriners Hospitals for Children Philadelphia, where VBT treatment was pioneered), Camilla’s parents decided to move ahead with the less invasive VBT surgery. (Dr. Samdani Interview Video) Dr. Samdani performed Camilla’s successful surgery at Shriner’s. While her hospital stay lasted approximately four nights, she felt immediate relief from her past back pain and started walking the hospital halls the day following her surgery. Within six weeks, Camilla was approved to resume normal activities and she grabbed the proverbial bull by the horn by zip-lining! Camilla, now 16, offers the following advice to others who may be considering VBT surgery, “Worrying about it was way worse than actually experiencing it.”

Camilla’s mom, Susana, says, “It was the right choice for us,” and makes the following recommendations for parents who need to consider VBT for their children:

At National Scoliosis Center, we put our patients first, with the goal being to avoid surgery if possible. In the rare cases where non-operative treatment is not a viable option, we are still available to help guide and provide support.

– Written in Collaboration with Camilla and her Mom, Susana