An abnormal curvature of the spine

85% of scoliosis cases are idiopathic, meaning the cause is unknown. Others are caused by underlying medical conditions such as spinal muscular atrophy (SMA), for example. The intent of a brace, such as the Rigo Cheneau is to stop the progression of the spinal curve, or decrease it in some cases; thus, preventing surgery. A few curves will progress despite our best efforts.

The graphic below represents monitoring guidelines for scoliosis. 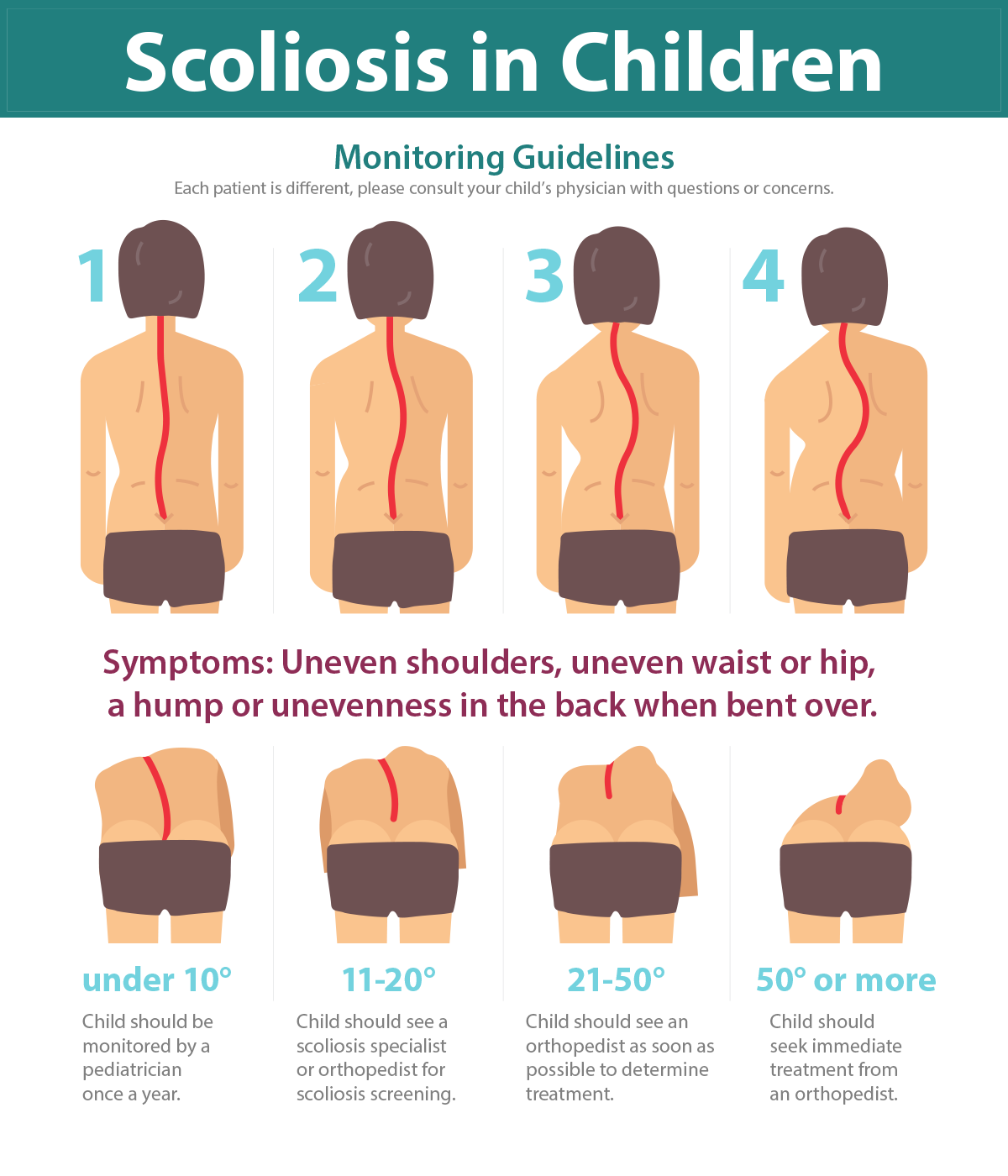 In the adolescent and young adult, a normal spine, when viewed from behind, appears straight throughout its entire length; however, when one looks at the spine from the side, there are two visible curvatures. There is a gentle rounding of the upper back from the shoulders to the bottom of the rib-cage known as thoracic kyphosis and an opposite curve in the lower back known as lumbar lordosis. These two opposite curvatures of the spine are necessary in the normal spine to balance the trunk and head over the pelvis.

A normal thoracic spine extends from the 1st to the 12th vertebra and should have a slight kyphosis ranging from 20° to 45°. When the “roundness” of the upper spine increases past 45° it is called hyperkyphosis”. Scheuermann’s kyphosis is the most classic form of hyperkyphosis and is the result of wedged vertebrae that develop during adolescence. The cause is not currently known and the condition appears to be multi-factorial and is seen more frequently in males than females.

A Rigo Cheneau brace customized with an extension, and fitted by an experienced orthotist, will effectively address the hyperkyphosis.

Some cases of spinal curvature stem from a genetic disease known as spinal muscular atrophy (SMA). Generally, individuals impacted by SMA lack the requisite motor neuron protein SMN (“survival of motor neuron”), resulting from genetic mutations on chromosome 5. There are other, more rare, forms but the most common type is related to chromosome 5. Symptoms may present any time beginning in infancy and all the way into adulthood. Symptoms and progression vary widely; however, in all cases the disease weakens the individual’s voluntary muscles causing impaired motor function. In particular, the muscles in the shoulders, hips, thighs and upper back may atrophy or weaken and become smaller.

When back muscles atrophy due to SMA, spinal curvature, also known as scoliosis, often results. Scoliosis potentially affects a patient’s life in many ways including: comfort, balance, arm function, and in more severe cases, breathing. Scoliosis back bracing can help alleviate these symptoms. A thoraco-lumbo-sacral orthosis (TLSO), such as the Rigo Cheneau brace, can be fitted and customized for individual SMA patients. It goes underneath the arms, around the thorax, lower back and hips. A TLSO promotes an upright position and helps alleviate many of the issues associated with SMA-induced scoliosis. It is important to note that a TLSO brace does not prevent the progression of spinal curvature for the SMA patient but it can improve the patient’s comfort and independence.

SMA patients should work with an orthotist with experience in scoliosis back braces for the best results and care.