Colleen’s mom had scoliosis, so she was very diligent in checking her daughter for scoliosis. When Colleen turned 9 years old she had an X-ray that detected a significant curve and she began bracing with Luke. When she turned 11, in 2004, Luke asked her and two other families to join him in Barcelona to be fitted with a Rigo Cheneau brace while 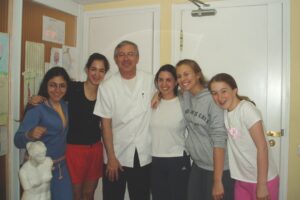 Luke continued to train under the leadership of Dr. Rigo and the methods used to create a highly-customized Rigo Cheneau brace. They accepted, and Colleen became one of Luke’s first patients in the United States to be braced with a Rigo Cheneau brace and treated with Schroth Physical Therapy (a scoliosis-focused physical therapy for people of all ages). “It was quite an amazing experience. We had a lot of fun and we were so excited about the new bracing technique that offered hope to my daughter,” says Colleen’s mom. 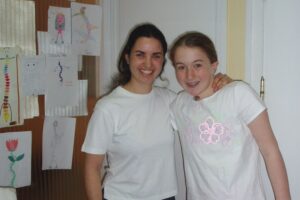 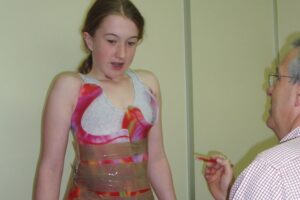 Although Colleen had a significant curve, she had little rotation and was very well-balanced. When it came time to decide if Colleen should have surgery, her care team agreed that it did not make sense to undergo surgery. Besides, Colleen and her mother were both determined to avoid surgery. So, Colleen’s course of treatment was to focus on wearing the new customized, Rigo Cheneau style brace made by Dr. Rigo and Luke in Barcelona, and Schroth physical therapy. The two combined helped Colleen get to a place where she could manage scoliosis and her curve stabilized.

Today, Colleen lives a normal, healthy life. She manages her scoliosis with Schroth physical therapy. At a recent check with Luke, she found that her curve is still stable. She is all grown up now and is a high school earth science teacher in New York. And, Colleen adds, “I am so thankful to Luke and the opportunity he gave me to be one of his first patients to be treated with the Rigo Cheneau brace. Luke is dedicated to helping those with scoliosis and it continues to show.”

We are so proud of Colleen and excited her scoliosis treatment continues to be a success!